Replicating the CPU board

The first problem was to get hold of a schematic and make sure it was correct. On-line I found hi-resolution pictures of both sides of the two PCBs so printed them out, stuck them together and traced each track on the PCBs, comparing it with the schematic and there were a couple of differences so a new schematic was draw reflecting the differences.

Now I had what I believed to be a correct schematic I started to look at what changes would be needed.

The original system used 74571 PROMS; which I don’t have and even if I did, don’t have a suitable programmer for. There was provision to use a 2716 EPROM and whilst this is a bit more modern and I do have some, they use weird programming voltages and my EPROM programmer doesn’t support them.

I made some changes to the schematic to remove the PROMS and support a 2764 EPROM instead. I also realised I could use an EEPROM if required which is nice.

I dropped the original 2114 RAM chips (which I do have but aren’t particularly common) in favour of a a single 6116 which I have a lot of; though as it turns out these aren’t as common as I thought either.

What followed were a lot of design revisions and corrections resulting in some significant updates. 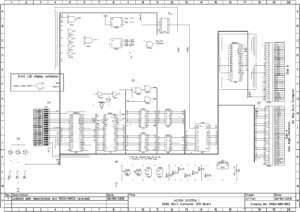 At this point I’d now generated a final version of the schematic. As I say it went through a lot of revisions and design iterations to get to this point, but it works.